Week 40:
The AWEX EMI closed on 1943c – down 4c at Auction sales in Australia this week. Just 87.2% of the 37,445 offering was cleared to the trade as the EMI posted its 6th successive weekly loss in AUD terms, whilst the EMI in US terms posted a 1c rise this week. AWEX market analyst, Lionel Plunket, points out that this 6 week accumulative EMI degradation has not been seen since 2012 where the EMI fall totalled 150c or -19.3% compared to the most recent 84c loss or -4.5%.
Despite the weekly loss, the EMI still sits around 105 above the same time last year in AUD terms whilst it is just 1.4% above the USD comparison. There is no doubt the factors affecting the price continue to be a combination of weakening demand and the increase of drought affected wools as a percentage of the weekly offering, coupled with the 10% fall YOY in quantity offered at auction.

Merino Fleece MPG’s were slightly weaker with 17.5-21.0 MPG’s falling between 10-15c with the basis between good and poor specifications and style ever increasing.
Skirtings held relatively well and in some cases the low VM best skirts were dearer that the equivalent poor fleece types.
Cardings in the northern region lost 30-40c, whilst the southern and western MC held or increased slightly.
Crossbreds continued to attract positive support with general rises of 20-30c in the 25-28 MPG’s and 32 MPG rise just 8c. The market is noticeably responding well to classed merino and crossbred clips as demand tightens.
The offering for next week is 38,712 bales as the release of the April Wool Production Forecasting is being eagerly anticipated.

Forward Price Report from Michael Avery (Southern Aurora Wool): The forward markets remain constricted with both buyer and seller looking for direction. The establish pattern of the last three to four years of medium to long prices rallies followed short sharp falls seems to be broken. The spot market edged down throughout March as the balance between supply and demand shifted slightly with off shore clients needing some relief. Export numbers for February were down 12% and the year on year down 16%. This is roughly in line with the estimated reduction in production. With quality and quantity likely to vary from week to week, we could see a bit more volatility but a continued easing trend.
Exporters are still finding it difficult to get forward commitments from processors at levels approaching spot prices. The lack of grower offering into the spring is hampering price discovery signals. Strong Spring hedging levels achieved during the market rally in February indicated a strong base level going forward. 19.0 (2225 to 2260) and 21.0 (2100 to 2150).
The spot market has lost around 100 cents since those peaks but grower offering levels remain unchanged to higher and attracting little interest.
We anticipate trade interest to remain solid through to June at modest discounts to cash. Spring interest to return at slightly reduced levels. 19 micron indicative interest 2150 to 2200 and for 21.0 micron 2050 to 2100.

Commentary: Moses & Son are delighted to announce their new Sheep and Wool Technical Advisor, Andrew Miller, who has been appointed the Wagga position left by the recent resignation of Dave Payne. Andrew is no stranger to Moses & Son clients, completing a 10 year stint as a Wool Technical Officer based in Young from 2000 to 2010. After an 18 month pause in his employment due to a family relocation to South Australia, Andrew worked from 2011 to 2015 as the Southern Australian Sheep and Wool Technical Officer with the last location being the Central West Moses & Son branch at Condobolin. Andrew will be commencing on the 29th April and will be servicing the region based in Wagga. ~ Marty Moses 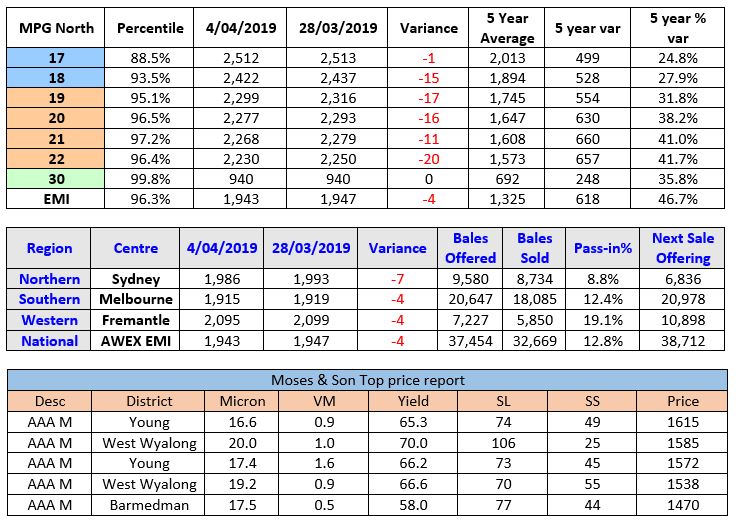