Did you know that there are large variations within all commercial flocks?

Below is a graph of ewes in a “typical” Merino operation, the maiden (hogget) ewes were fleece weighed and Micron tested and then a $/head fleece value was allocated for each sheep. They were then plotted to show the natural variation. The ewes had an average body weighing of 65kg, Micron average of 18.8um (range: 17 – 19) and an average fleece weight of 7kg (range: 3.2 – 7.3kg).

As you can see there is a large range of production within this mob. These ewes were classed in August, (visual only) removing 10% of the mob, they were then fleece weighed to remove the next 15%. 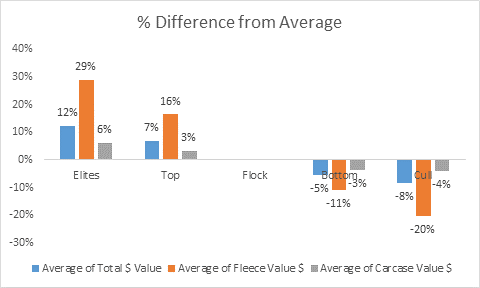 When compared to each other, you can see that the “elite” animals in the below flock analysis were 12% more productive than the “Flock” sheep (average), and that the culls were 8% less valuable. (Remember these sheep have been visually classed which will remove the “true culls”.)

Did you realise that when selecting sheep using only visual tools that you could be missing out on 30% of your productivity?

Would you like to be able to select ewes into your system who are best suited for production and maternal ability?  So, what do I do?

You need to collect 3 pieces of information:

Does it all sound a bit too complicated?

That’s where we come in. Moses & Son are able to travel to your farm, collect all of the necessary data and help you to identify which animals are the most productive in your enterprise. For more information contact 6977 3100. 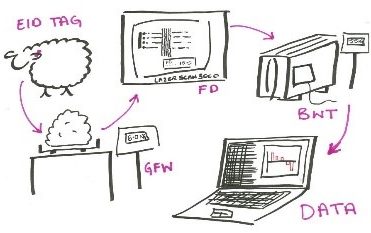